Every year, when I write this letter, I think, “Maybe next year will be less dramatic.  Maybe my life will finally stabilize.  I don’t have to top myself every year.”.  Certainly, cancer was not the way I wanted to top myself in 2018.  In 2019, I traveled every month, was in 9 countries, a dozen states, and acted as if I  was just released from prison, having cheated death.  2020 will be the year I settle down, I said.  2020 will be the year I stay put, I said   Maybe 2020 is the year I focus inward, reflect, write more and find peace.  Be careful what you wish for. Staying home in 2020 was a matter of life and death.

AND it drags on.  I’m catching up on my cancer blog.  I see the COVID-19 reflected on my scale from too much staying put.  I’ve worn a path in the floor from the laptop to the fridge to the toilet to the bed.  My Google travel map is a 5-mile square area.  There are a few things I’ve been meaning to do for years, like start selling that box of stuff I moved from Fort Collins marked “eBay”, or go through the seemingly hundreds of rock posters I have from Coney Island High, shows I’ve attended or purchased with the intention of framing.  2020 was the year I got my shit together in one place.

We drove from Florida to Connecticut to pack up the stuff that’s been in my sister’s garage since February of 2015.  Both Kevin and I have had one foot in Florida and one in Connecticut for the last two and a half years.  That was mainly to do with my cancer treatment while I used the Florida house as a refuge between treatments.  When I drove, we took only what I could load into it.  The cat flew to West Palm Beach with me one trip to keep Kevin company.  Any road trip we made up north carried a carload back.  Flower became quite the little traveler, but we never officially MOVED.

First round of trying to haul all of our gear down did not go as planned.  Kevin was transporting is Army Truck AKA Deuce and a Half Troop Transport vehicle and what we thought would be “all our stuff”.  Turns out the transport vehicle had a weight limit, and even though The Deuce, weighs 13,500 lbs. unladen, could hold 5000 lbs. of stuff, the flatbed could not.  SO, we loaded Kevin’s tools needed for the house, which weighed a ton, plus two chairs of mine that Kevin hates.  All the household stuff stayed in Connecticut, including all my art, photos and personal items.  We had to find another way.

A mid-pandemic trip to Connecticut was a feat of logistics and tests.  We had to find “safe houses” along the way, where we knew people who followed guidelines, had separate bedrooms and bathrooms, and would take the cat, who needed to be with us.  Flower had become mortally ill with heartworm in the end of March, and we were doing everything within reason to keep her stable and comfortable. We packed masks, gloves, and sanitizing wipes.  We plotted as few stops as possible, drive-though meals and lots of snacks in car, making gas/food/toilet stops in one fell swoop.

Part of Operation Connecticut Evac was moving my mother out of assisted living, where there was a COVID-19 outbreak. When two people died, I was ready to drive up there and bring her to Florida.  In fact, she was in Florida in February and I told her to STAY, but she wanted to get home to her dog.  Both the Building’s administrators and family assured me mom was safe, as she had been self-isolating since she returned from Florida.  Except for one time when a staff member came in to help, and then went out sick.  Then mom got sick.  And the dog had to go board since they locked down.

It was a nailbiter of a nightmare every single day.  My emails to the facility’s nursing staff went unanswered.  The email death toll was climbing.  The sales manager we developed a relationship with was REALLY essential in getting mom the help she needed, as there were no new people coming in - only people going out either dead or alive.  We got local visiting nurse service and Mom went automatically on hospice.  We had some tough conversations – to intubate or not to intubate?  CPR no CPR?  We were throwing everything at it from CBD oil to Chinese medicine.  We thank Sweet Baby Jesus in the Manger we didn’t REALLY have to make the hard decisions, and mom recovered,  She fled to the Cottage at Arlan’s, which was out former home, the minute she could get out.  Mom could even have her dog there, as Abby has been trained on the Bussell’s invisible fence.

We there were more temporary residents in the Cottage then in the Big House for s number of weeks – Mom, Abby, Kevin, me and Flower.  It took a while to pack up as only one person at a time was allowed in mom’s apartment.  One of the summer’s Tropical Storms left us without power and running water for almost a week, so mom returned to her apartment to enjoy those creature comforts and pack.  Mom’s stuff was going to be storage until she plotted her next move, a scenario I was also dealing with at the same time.  Kevin managed the logistics of our belongings.  A POD was over $2400, and traditional movers would be over $3000.  FINALLY Kevin devised a scheme that transported our stuff onto pallets.  We had to steal pallets and pack into squares warehouse style.

Stealing pallets was easy – borrow mom’s station wagon, go behind national chain store, throw pallets in the back  Kevin thought we only needed two or three.  I bought a scale to weigh each box/item on the pallet, as we were charged by the pound.  My amp nearly broke the scale, as did Kevin’s vise.  Kevin built a crate for my most precious art.  When all was loaded up, we had 6 pallets weighing 2600 lbs.  We had them delivered to a storage space so we could to integrate our lifetime accumulations into our 1100 sq. ft house over a 30-day period. We plan a storage shed out back. 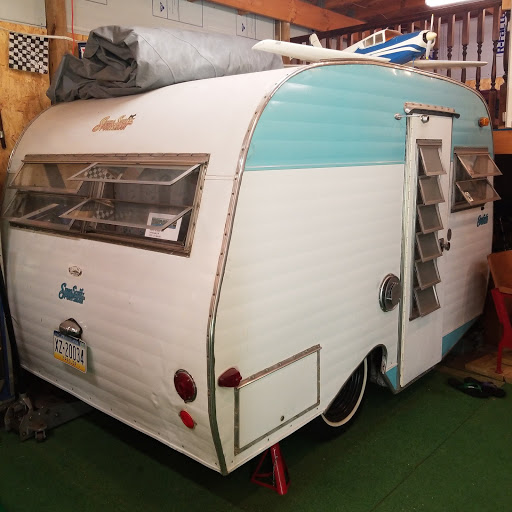 Unplanned extra weeks in Connecticut allowed us to attend our annual camping trip in Pennsylvania.  We made the drive to West Freedom with crammed car and cat.  Our accommodation was a vintage Scotty camper, which kept wild Flower contained.  We kept socially-distanced circles of folding chairs and campfires, surrounded by leafy trees. It felt good to lie in thick green grass to the sound of horse-drawn carts. Flower enjoyed the grass, exploring on her wobbly legs.  She received lots of pets and scratches from caring hands.  The last night in the trailer, she meowed through the night.

We packed up Amish butter and headed home, staying the night in lovely Savannah.  I was up during the night with Flower, as I had to carry her to the cat box.  After a proper Southern Brunch with grits, we were home again, unpacking what we packed once again.  Now in familiar surroundings, we thought Flower would be more stable at home.  I was up several times at night again.  Her red blood cells were not existent.  We asked the emergency vet if we should take her home again. That was not to be.  The decision is less for us and more for her.  We rode home in silence, the carrier empty.

We unloaded our storage space into our guest room, Then I went to California to unpack mom.  Mom rented a house in Northern California to be closer to Jevan and his kids, whom my mom rarely saw.  She was done with communal living.  We got her set up and wired and even procured acoutrements not needed in assisted living, like a dining table and barbeque grill.  I passed the baton to Jevan to keep an eye on mom.  It’s exciting that she’s starting a new chapter at age 85 after cheating death.

We head into the holiday season with no social or special plans, but hopeful for a more sane and stable 2021, and with a bit of a black hole where Flower used to curl up on the bed.  Hope you and yours are safe and healthy and stay that way until COVID goes the way of polio 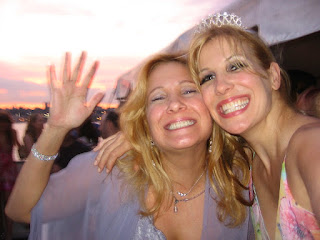 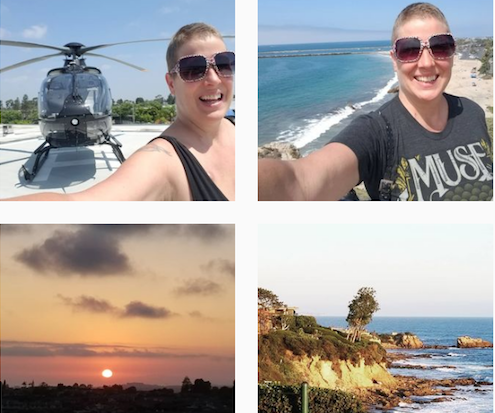 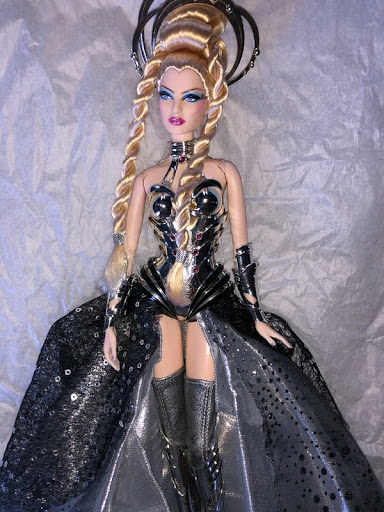